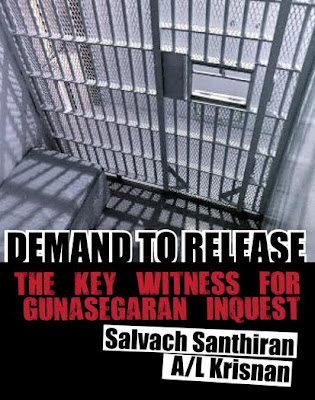 SUARAM condemns the police beating and arrest of K. Selvachandran, a witness in R. Gunasegaran’s death in custody inquest. He had testified during the inquest that he saw Lance Corporal Mohd Faizal Mat Taib assaulted Gunasegaran before the suspect collapsed and died. On 25 October, the coroner’s court gave an “open verdict” into R Gunasegaran’s inquest because the cause of his death while in police custody could not be conclusively proven.

On the same day, K. Selvachandran was arrested at his home around 10pm by 5 plainclothes police officers and beaten up in front of his wife and children before he was taken away to the KL police contingent headquarters. The officers told Selvachandran’s wife, S. Saraswathy that he would be detained for 60 days, and may be extended to an additional 2 years. It should be noted that only 3 laws allow for such a long period of detention, namely the Internal Security Act, the Dangerous Drugs Act (Special Preventive Measures) and the Emergency Ordinance.

SUARAM is extremely concerned with the arrest and detention of Selvachandran – as the police seemed to be sending a strong message that they can act with impunity with no regards to the rule of law, police professionalism and the law and procedure governing their conduct. It cannot be a mere coincidence that Selvachandran was arrested so soon and further more he was detained under unspecified charges under draconian provisions that allow the police to detain a suspect without trial for up to two years. It is a blatant abuse of police power that points to police retaliation

SUARAM demands for the immediate release of Selvachandran and calls for Inspector-General of Police, Tan Sri Ismail Omar to walk the talk of his 4P (Proactive, Protective, Performance-oriented and People-oriented) plan by first curbing the culture of lawlessness and abuse of power in the police force as exemplified in the death of Gunasegaran and detention without trial of Selvachandran.

The IGP must ensure that police officers adhere to the laws and procedures that govern the arrest and detention of suspects, and they cannot act as they pleased to retaliate against a witness who testified against them. What message is being sent to other potential witnesses other than a strong warning not to testify against the police?

SUARAM also calls for the implementation of the IPCMC as recommended by the Royal Commission on the Police in 2005 to hold the police accountable over abuse of power and human rights as clearly proven time and time again; the police cannot be relied upon to investigate themselves.