Skip to content
SUARAM is pleased to invite you to the launch of SUARAM’s Malaysia Human Rights Report 2009: Civil Political Rights. The launch will be held at the following:
Date: 21 July 2010 (Wednesday)
Time: 10:00am – 12:30pm (Lunch will be provided after the event)
Venue: Mandarin Court Hotel, 55 Jalan Maharajalela, 50150 Kuala Lumpur.
(Near the Selangor & Kuala Lumpur Chinese Assembly Hall. Please follow this link for the location map of the hotel: http://www.mandarincourthotel.com.my/location.php)
Kindly confirm your attendance with John Liu at 03-77843525 / 77835724 or [email protected] by 19 July 2010. We look forward to seeing you there. 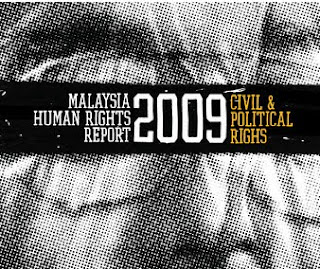 About SUARAM’s Malaysia Human Rights Report 2009:
Civil and Political Rights
When Najib Razak succeeded Abdullah Badawi as the Prime Minister of Malaysia in April 2009, he promised reforms in response to the growing demands for action to implement human rights compliance and democracy.
This promise did not materialise. Instead, the year saw a massive crackdown on the freedoms of speech, expression and assembly, with close to a thousand people arrested for peaceful forms of protest, signalling an increased level of intolerance shown by the Najib government towards dissent as compared to that of his predecessor.
2009 saw the biggest anti-Internal Security Act (ISA) rally to date and it forced the government to announce a review of the draconian legislation. Nonetheless, more than one thousand individuals remained in detention without trial.
At the international level, the government’s record on human rights deteriorated with at least two high-profile reports in 2009 highlighting the collusion of government authorities in the trafficking of refugees at the Malaysia-Thailand border. When Malaysia’s human rights record was reviewed by the United Nations in 2009, most recommendations and criticisms by the international community were rejected by the government.
Consistent with its record since 1998, this edition of SUARAM’s Annual Human Rights Report on Malaysia documents the trends and cases of human rights violations in the country, as well as the struggles of the Malaysian peoples and human rights defenders in 2009. 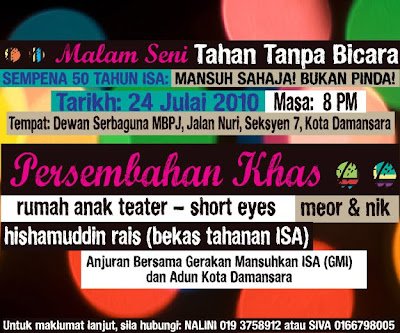 Gerakan Mansuhkan ISA (GMI) and Suara Rakyat Malaysia (SUARAM) would like to invite all concerned citizens to a Candle light Vigil in conjunction with 50 years of  ISA. The Vigil will be held on the 1st of August 2010 at several parts of Malaysia such as Kuala Lumpur, Penang, Perak, Johor, Kedah and Kelantan. We demand the Government of Malaysia to Abolish the ISA as soon as possible as the barbaric and unlawful Act has existed in Malaysia for 50 years. The ISA is draconian and most importantly, it is against the fundamental human rights.

Please join us together to fight the ISA and all other detention without trial laws! Together We CAN Bring CHANGE!

GMI Secretariat will update everyone from time to time regarding the venue of the Vigils in each state mentioned above. Please bear with us. For further info, please contact Miss Nalini at 019 3758912 or 03 77843525.